6 easy tips for changing the world

Earlier this year I sat listening transfixed and changed, to Muhammad Yunus. His unique and personal perspective was so wise and rich that I vowed to not to just add ‘write an article on Yunus’ to my overburdened To Do list. 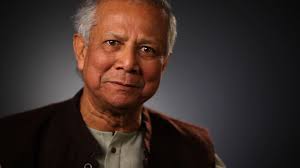 Yunus was a professor from the densely populated, and dangerously low lying land of Bangladesh. He became the grandfather of social business. He moves and talks like the Dalai Lama. They feel cut from the same cloth. Disarmingly humble, a child’s soul, practical and smart.

The story of how he came to establish Grameen Bank, the first micro-credit agency in the world and then a whole series of social businesses which has seen him win the Nobel Prize and dozens of others of recognitions, along with a seat at the global table of big conversations, is bursting with insights and value.

Here are the 6 things I took away from that powerful few hours with Yunus. Smart and simple ways to make the world a better place which we can all take a little from.

1.    If you want to feel a sense of purpose, solve real problems

There is a lot of research that shows that people feel a sense of purpose if they are making a difference. Yunus shared how as a Professor of economics, he was faced with the very uncomfortable reality that he was teaching economics to people who wouldn’t be saved by it.  The problem on their doorstep was different. He was troubled, and wondered how he could really be useful when people were dying next door. He started spending a few hours each week simply walking around the poor rural villages near the University.

As Yunus spent time in the world of poverty talking with people, he learned that loan sharking was an awful problem that was destroying families and futures. So he started lending tiny amounts of money to just a few people. It went from 10 families to 100 families just because what he was doing seemed to be solving a problem. Every time someone asked, he celebrated it as a success. He must be helping he thought. People repaid and the system continued.

3.    The status quo is just a place to improve from

When Yunus went to the banks to formalize what he was doing he was told that they judged poor people as not credit worthy. He decided that actually the banks weren’t ‘people-worthy’ and set about creating a bank that did the opposite to the banks.

As of January 2011, the total borrowers of the bank numbered 8.4 million, and 97% of those were women. Many of the women who receive loans pull their families out of poverty in five years or less.

4.    When it is the system that created the problems, start a new path

Yunus’ experience with establishing Grameen was followed by other social businesses. He says that from this he understood that the system that created our current problems won’t solve those same problems. Its an adage we’ve all heard a thousand times in Einstein’s words but it’s given a fresh and globally relevant meaning by Yunus.

He argues that the mechanisms of society that created severe and worsening wealth inequality, environmental degradation, and escalating global unemployment will not solve those same problems. Humanity needs a new path. For him, part of this path is about challenging our unquestioned beliefs around what business is.

5.    Keep the business mechanism but use it for social outcomes instead

Yunus thinks charities are great and important but he highlights that this traditional model has a challenge. The money can only be used once. Someone gives money, it gets spent and then you have to come back for more. The business model recycles money so you keep getting more to do the work.

He argues that we’ve all largely fallen into the dominant belief that business exists to make money. He challenges this – human beings are not money-making robots. We have a choice. There are two kinds of business in his words – business to make money, or business to solve problems. Keep the business centric mentality he says, but exercise that part of our nature that is selfless, not selfish. There’s no value judgment, just the importance of being aware that we have a choice. If we reverse the tide of business creation models, we reverse the tide of the problems.

6.    Ditch the concept of the job seeker, this is the era of the job creator

As Yunus grew Grameen he came across the next horizon of challenges for the people of Bangladesh. The young people were growing up with greater financial means and an education (because it’s a requirement for a loan), but there were no jobs.

He quips that when human beings came onto the planet we didn’t send job applications! What’s gone wrong with our mentality? Why are huge parts of the globe suffering from rising unemployment?

Yunus points out that only in the last 200 years the idea that we have to be employed by someone else has taken root, and its an idea that’s on its way to obsolete in his mind. His solution was to add a new service to Grameen. Mentoring and loaning to the next generation to support business enterprise. The goal is to move back to a world in which people see themselves as a ‘job creators’, not job seekers. Move away from seeing our children as dependent on others and at the mercy of a economic market they can or can’t enter.

For me on that day I saw completely the world through the eyes of Yunus as a place of unlimited potential. It’s thrilling and unnerving. I left a high paying commercial role decades ago and joined the non-profit world and now have my own social business. There’s always another horizon of exciting opportunities to combine business mechanisms with social outcomes, and still feed your own family but the terrain is still fairly unmarked and there is a strong cultural pull that has a different drum beat.

For the next generation, Yunus has a ambitious challenge: get on the social business learning curve. He’s part of seeding a growing world of global dialogue, mentoring and study, which blends challenge, sustainability and purpose.

In Yunus words, lets not choose ‘to live a good life now and destroy the planet for our children’.

If you’re interested in reflecting on your career, check out more on about how we can help here.

Interview with Sarit Vandegraaff – How to lead high value-creating teams

My experience of Leaders by the Fireside: Interview with Jess Wilson, CEO, Good Things Foundation

My experience of Leaders by the Fireside: Interview with Suzie Riddell, CEO, SVA